As British theatre looks for a blueprint to emerge from the pandemic, it could do worse than take notes from a notorious experimental theatre on Londons’ Drury Lane, which burned brightly – and briefly – in the late 1960s. In 1966, minister of the arts Jennie Lee brought Jim Haynes – co-founder of the highly successful Edinburgh Traverse Theatre – to London. Haynes, along with John Calder (publisher of 23 Nobel Prize winners including Samuel Beckett), were also key catalysts for today’s Edinburgh Fringe and book festivals. Haynes came to launch a London Traverse at the Cochrane Theatre. Despite ample funding in a troubled economy from Lord Goodman and a West End transfer of Joe Orton’s Loot it didn’t work. 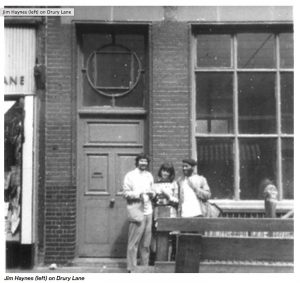 He found it too constrictive and felt more shopkeeper than producer; the effort more industry than art form. Recognising a need for radical change, Haynes opened the London Drury Lane Arts Lab in 1967, fuelled by a frenzied counterculture and insatiable public appetite for something new. The Arts Lab’s contributions to British theatre are significant. It held the first uncensored feminist show in London – Jane Arden’s Vagina Rex and the Gas Oven – as well as Heathcote Williams’ The Local Stigmatic. Richard Crane’s The Girl with No Arms became a success (then Crane became the National Theatre’s first resident playwright). David Hare and Steven Berkoff also debuted work on Drury Lane. Films deemed too hot for British eyes – Andy Warhol’s Chelsea Girls, Stanley Kubrick’s Lolita and Shirley Clarke’s ground-breaking A Portrait of Jason were featured. New artwork by Roelof Louw, John Lennon and Yoko Ono were exhibited, and David Bowie wrote songs at the Arts Lab. 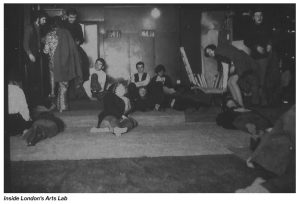 A massive membership including Leonard Cohen, the Rolling Stones, John ’Hoppy’ Hopkins, Kenneth Tynan and Barry Miles nourished the Arts Lab. Apart from membership fees, small donations and a £5,000 cheque slipped to Haynes in Paris by a mysterious oil heiress, the Arts Lab received no funding. Convinced it was a drug den despite Lee’s assurances, Lord Goodman shut it down. However, the successes were great and the people came. Can this be a road map out of lockdown? David Curtis — former Arts Lab film curator and later film officer for the Arts Council, with two forthcoming books on the subject — and I agree that to support new talent and keep venues open there’s mileage in the idea of more, shorter performances on one night. Small is beautiful.

Perhaps the Horse Hospitals and Southwark Playhouses, with fresh air, high ceilings and wide corridors are looking pretty good just now? Many clothing retailers, restaurants and even banks have embraced boutique and pop-up shops long ago. They work. Membership subscriptions and theatre clubs – key to The Traverse and Arts Lab successes – might also provide stable revenue and promotional options. The recent ‘meet and greet’ explosion has proven fruitful with live performances and they can become authentic, accessible places for public discourse – socially distanced of course. I for one, would pay double ticket price for quality, less-crowded theatre – hold the tourists, peanuts and tat. For leaner budgets, simultaneous online delivery is now a big option and a new art form altogether, which allows audiences to still be present. We don’t love the industry – we love theatre. It’s difficult to believe that a city that kept the houses open during the Blitz can’t embrace a brave new challenge, and long-overdue contemporary innovation on the stage – especially when there is such a good model to follow.